The Franciscan friars wanted this church and convent, dedicated to S.Francis, to be built, probably while the saint was still alive. The task was finished in 1291, in a Romanesque-Gothic style characteristic of the Abruzzo region. The convent was abandoned by the Franciscans in the time of Napoleon; a few years later, after it was re-annexed by the papal state, it became a convent for an order of nuns.  After the floods of 1859, pope Pio IX had two walls built in order to enclose the rivers of Ussita and Nera, but the new river banks meant the church had to be moved. Its façade was re-sectioned and set back and the floor level was raised by a metre.  The earthquake of 26 September 1997 damaged part of the convent, now completely restored, which now houses the head offices of the Monti Sibillini National Park. 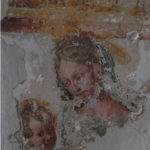