The 14th Century church of S. Martino dei Gualdesi is flanked by a bell tower; its decoration of small arches reveals Romanesque influences; the interior is of one nave under a vaulted ceiling. The apse is clearly separated from the part of the church that was destined for worshippers. On the main altar, a frescoed tabernacle topped with a canopy is supported by two stone columns standing on lions. The wall on the right, like the apse, has been completely frescoed: the Risen Christ is shown surrounded by the craftsmen’s tools that were banned from use on feast days in Medieval times; a true catalogue to help worshippers memorize this important rule. Between S. Benedetto and S. Sebastiano, the fresco of the Madonna with Child is by Paolo Bontulli, dated 1521. The Crucifixion at the far end has been attributed, in part, to Paolo da Visso. His also is the Annunciation on the arch of the ciborium. 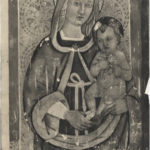 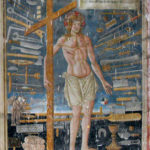