The Pieve of S. Maria a Mevale, alone on a hilltop, was built in the XIth Century in Romanesque style. Its Rennaissance portal deserves special mention, thanks to the beauty of its columns that are supported by lions, for its sculpted capitals and lunette, with a 15th Century sculpture of the Madonna with Child. The portal on the left side of the church has traces of 14th Century frescoes. The inside is marvellously decorated by artists from the XVth to the XVIIth centuries. To the right of the side entrance there is a painted decoration in gothic style, attributed to Tommaso di Pietro da Visso. Pietro and his disciples also painted the frescoes in the central nave, while the paintings in the apse, amongst which a Dormitio Virginis, were the work of Giovan Battista da Norcia in the16th Century. A cast iron gate leads onto the chapel, built in 1478 to house the Romanic-Byzantine panel depicting the Madonna del Monte, now in the museum at Visso. Frescoes by Angelucci decorate the lateral walls. 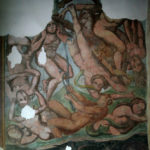 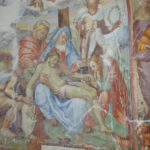 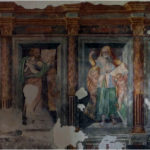 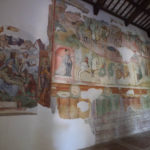